Our Living Library Event’s fundamental aim is to overcome prejudice between the groups of people, who are dissociated in each other according to the facts as gender identity, religion, political view, occupational experience, social position, lifestyle habits and ethnic origin. Likewise, our aim is to band together these groups of different people for ensuring intercultural dialogue and positive interaction among them by implementing the methods of Living Library in a local level. 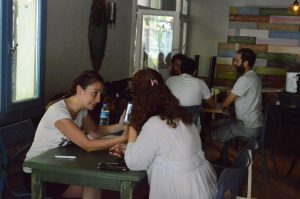 In 20th of August 2017, Sunday, 13 different living books met with their readers at Livorno Pub, the place where the activists, mostly young people such as university students, and the intellectuals generally choose for their leisure activities. Our institution’s Living Library event was planned between 1.p.m. to 5 p.m. (4 hours long in total) 7 people from our institute’s volunteer pool undertook the role of librarians as well as organizers. On the other hand, 3 of them were also living books, to the degree of demand from the readers (participants in general), also presented their unique stories. So, our priority in this case, was based on the external actors that are not our institute’s volunteer living books, the people who were been contacted under the favor of our institutional network, is generated with several non-governmental institutions.

So, the NGOs that were subjected to our LL Event, also let us have been communicated with books were 3 in total. The first one was Kaos GL; a non-governmental organization that is working for the rights of LGBTIQ+ in general and also undertakes some cultural, social and political projects and activities in gender sphere in Turkey. Thereby, 2 living books had participated our LL Event from Kaos GL, a transsexual woman and a gay activist who also works for the rights of LGBTIQ+ refugees. The other NGO was the Association of People Having Impaired Hearing and Sign Language Turkey. An expert of sign language had participated from this NGO as a living book. The last institution that we contacted was a women’s shelter, and the coordinator of the institution recommended one of their asylum-seeker in order to let her been as a living book.

In case of reaching our target group, we first made an online announcement via our institute’s website and also from its own Facebook account. We also encouraged our volunteers to share the event’s announcement through their own personal social media accounts. Thus, we aimed to reach as much as people who could have been participated and have been interested in Living Library event and aim to promote intercultural dialogue. Apart from that, so many people spontaneously came to our event, the customers of the venue, where we chose as the place for being implemented our LL Event. Thus, the rating of participation was intense and we reached our level of determinatum. 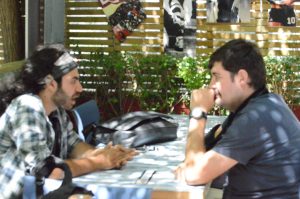 In case of informing the living books and the participants about the implementation of Living Library, we created 2 printout guidelines, which submitted some necessary advices. (You can find the English version of these guidelines in the end of the report). On the other hand, every book had its own table and own catalogue, which also informed the reader about the title and the content. In order to avoid confusion during the LL Event among the participants, we created some bills for readers as well, so they could reach the books that they chose them easily in trust of our librarians.During the implementation of LL event, we specified 20 minutes sessions, also 10 minutes breaks for books and readers. So that, we aimed to create fruitful sessions both for readers and books. We allowed at least two readers for every book.

Our Living Library  catalogue is composed of 13 living books as follows;

5-Tolga Güntürkün- The Man with Ironhorse

Content: being an entrepreneur woman in business life and motherhood, business world and challenges for women in Turkey, maternity vs. femininity

Content: from the evolution of universe to biological evolution, classic quantum evolution of mechanical laws, theory of evolution and society

Content: EU citizenship, living in Turkey as a foreigner, being a tourist, culture and society of Turkey according to a foreigner

Content: The conditions of the places of refuge women in Turkey 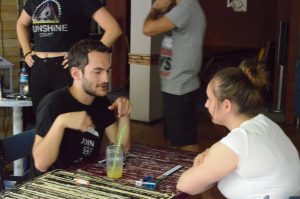 Our target group was determined as young people mostly as university students, civil society volunteers and young activists. On the other hand we aimed to reach the youth leaders, youth educators, academics, and intellectuals who can able to have opinion about the intercultural dialogue and also target to encourage them for implementing LL Methods in their future actions, more systematically and institutional level as in the public spheres. Our event had started at 13.p.m. and last to 17.p.m. So it took 4 hours in total. Every session last 20 minutes, 10 minutes breaks.

According to our observations and the feedbacks from the participants, our LL Event achieved our participation rating that we determined in our early preparation meetings. As well as the demand for books and the second request for another LL Event by Renaissance Institute by participants (and by the books) also gratified us. The main purpose of the event that is based on to overcome prejudice between different groups of people and implementing the LL methods in order to provide face to face interaction between people in a free venue and improve the intercultural dialogue practices in local level have been obtained.

Quotes from beneficiaries as f 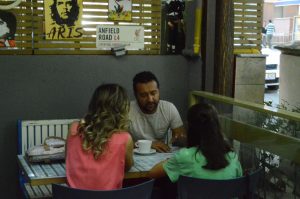 “I really thank you to implement such a good event. It was my first experience that talking with a transsexual woman, and it changed my point of view against the LGBTIQ+ people.”

“While I was talking with the asylum-seeker, I had more knowledge about our position as being women in the society. Thank you.”

“Talking about the evolution involves almost every aspects as politics, philosophy, religion, culture etc. Because those are also the subjects of evolution. This was my first experience as being a Living book. Thanks.”

Yusuf, the Evolution Book and also The Reader

“ I was so pleased to share my experiences as an activist with other people. This was my first experience, but I would really like to be a book again. Thank you.”